Another pestilent phenomenon is chain mail, “send this to everyone” mail, “virus warnings” and the like. If you get email that requests — even urgently — that you spread the message far and wide, that’s a warning sign that you should dump it. You may live to greatly regret it.

Some mass email campaigns claim they are “helping” a “good cause,” like the cancer-struck kid that wanted to get in the Guinness Book of Records by getting as many cards in the mail as possible. Yeah, the kid exists, and got 16 million cards the first year — and that was 1990! But not only did he not die, he is still begging for the cards to stop.

Yet the story still goes around now and then. Later Internet versions of the story switched to “send the cards to the Make-A-Wish Foundation in Arizona”; they are getting so many cards that it is interfering with their very worthwhile mission to help sick kids. So, people trying to be helpful are inadvertently causing true harm.

Most “virus warning” mails are fake too, and keep going despite being years old. The “Good Times”, “Deeyenda”, “Irina”, “AOL For Free” and “Ghost.exe” warnings (and certainly many others) are all hoaxes, and spreading them around causes nothing but resource drains, bother, and sometimes panic to the people you send them to. For more on ’net hoaxes in general, see https://www.snopes.com.

There are real viruses, of course. However, if you keep your email program updated (especially MS Outlook: always keep an eye open for new security “patches”!), keep your Windows updated (check Microsoft’s “Critical Update” service at least weekly, if you don’t have it set to automatically load updates), and never click on attached files that you don’t know are safe, you’ll be quite safe from viruses. For added protection, use a virus scanner and update it regularly.

Then there are the urban legends. You get stories in your email all the time that say they’re true. A ship telling a lighthouse to get out of the way. The jet-equipped car crashing in Arizona. The good-ol’ Southern boys accidentally blowing up their truck while ice fishing. The lawyer who insured his cigars against fire, and then turned in a claim after he smoked them. People waking up in ice finding a kidney has been surgically removed. Spiders under toilet seats. Bill Gates (or the cancer society) will send you money for forwarding email.

All are urban legends and are not true. Think about it: cancer societies accept donations, they don’t send money out to idiots who forward emails! And Bill Gates isn’t rich because he does the same thing. Don’t be stupid and fall for such obvious hoaxes! For details on these and many others, see Snopes.

If you see any plea or warning floating around the net, especially if it tells you to “send this to everyone you know!”, the best bet is to assume it’s a gag, hoax, or urban legend unless proven otherwise by going to the source. Please delete it, and do not send it on, to anyone. 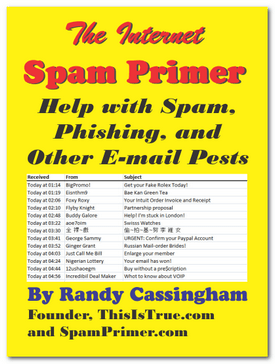 Regain Control of Your Inbox! A full explanation of the spam problem and the solutions that will work for you, even if you're not a techie! It's everything on this site and much more, for just $4 on Amazon. Click cover to order.